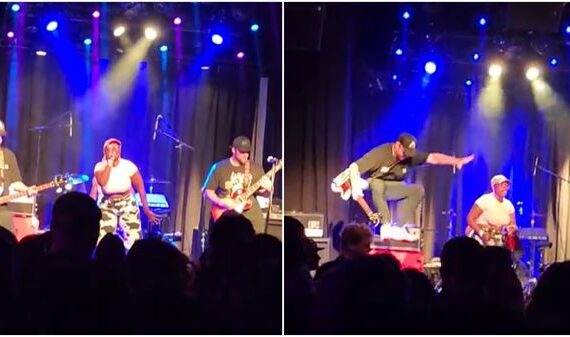 A few days ago, I attended a hardcore punk rock show that included my daughter Bryanna Bennett’s band Buggin’, which she is the lead vocalist for. This was part of their West Coast, 6 city tour, which included several sold out shows. I had seen her perform before, but not with this new band that was formed during her college years. She has been attending hardcore shows since she was 14 years old and performing in a band since high school.

Throughout the evening, I not only enjoyed all 4 bands performing, but I also engaged in one of my favorite activities – people watching. I enjoy observing people in different settings and trying to understand the motivations for what they do. If you’ve never been to a hardcore punk rock concert, the most interesting activities, outside of the performers, takes place in the moshpit in front of the stage. I observed people wildly dancing in the ‘pit’ area as well as people running across the front of the stage to jump into the crowd standing around the moshpit. Even some of the musicians and frontpeople (including my daughter) leaped from the stage into the crowd.

The jumping off the stage into the crowd is what really fascinated me. It wasn’t the jumping into the crowd that was interesting, but the people catching them is what I found intriguing. People jumped off the stage and trusted their fellow audience members to catch them, which they did! For the 4 hours of the show, I didn’t see anyone fall. I remarked to a friend who came with me how “that’s a lot of trust.” When I mentioned this to people in the days after the show, they immediately compared it to a trust fall in which a person closes their eyes and falls back expecting others to catch them before hitting the ground. These exercises are usually for the purpose of building trust amongst teammates or members of a group. The difference here is that the people they are relying on to catch them are not teammates or friends, but just part of the hardcore community or show attendees.

Leaders need to build this kind of trust with their teams. Followers need to know that their leader will be there to catch them when they fall (or fail). We all fail. It makes it a lot easier to go over and beyond or take risks if you know you won’t be punished for a minor infraction, or handled with empathy for a more serious one.

One of the key components of effective leadership is developing a leadership vision. This is an important concept I’ve covered in my university organizational leadership classes, in my corporate and healthcare leadership programs, and in the new military leader course I developed. It is the guiding principle that helps a leader stay on track and provide consistent leadership. It’s like the relatively small rudder that keeps a large ship headed in the right direction. In my leadership training sessions, each participant is charged with developing a leadership vision that states what they will do as a leader and what they will not do as a leader. In follow up coaching sessions, many have told us how they have referred back to their vision, especially in challenging times.

Trust is not only about how the leader handles things when they go wrong, but also how the leader handles things when their followers are successful. People want to be recognized for their successes. The rewards don’t have to be big or monetary. It could be recognizing them in group meetings or having a token reward for someone who performed exemplary that week.

Building trust with your followers frees people to take risks and go that extra mile. It helps people feel comfortable enough to alert the leader to problems early on before they become bigger and/or harder to fix or overcome. Trust also frees people to speak up with new ideas, share different perspectives or new ways of accomplishing tasks.

If you really want a high-performing team, make sure you build it on layers of trust. After all, you wouldn’t want to be the person the crowd doesn’t catch. Likewise, you don’t want to be the leader your people won’t come to because of a lack of trust.