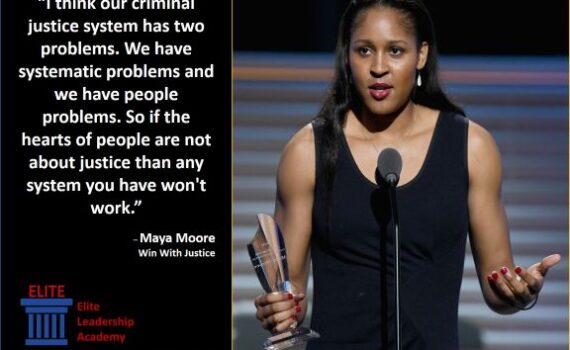 In 2017, Maya Moore was named Sports Illustrated’s Performer of the Year after leading the Minnesota Lynx to their 4th WNBA (Women’s National Basketball Association) Championship. This was after winning back-to-back NCAA Women’s Basketball Championships with the University of Connecticut, a WNBA Finals MVP, two WNBA All-Star Game MVPs, two Olympic gold medals and the WNBA Rookie of the Year Award. She was called “the greatest winner in the history of women’s basketball (with the best yet to come),” also by Sports Illustrated. In 2019, she decided to put a pause on her basketball career to help an inmate wrongly convicted of a crime.

Maya worked with a different type of team and in March 2020 won the release of Jonathan Irons after he spent 23-years in prison. Athletes are increasingly speaking with more urgency about social issues, but few have been as engaged as Maya. She has supported the effort to free Mr. Irons with her money, time and career. In fact, she took another year from the WNBA to continue her fight for social justice.

Learn more about Maya and her social justice leadership.