When most people think about the challenges of implementing healthcare analytics, they wrongly expect it to be the data, talent or technology.  Executives that have been successful implementing healthcare analytics know the top challenge is leadership.  In a study performed recently, leadership was identified as the top challenge by participants.  In fact, it wasn’t even close. Leadership was identified as a challenge by 29% of the respondents versus 18% for data and 14% for talent.  Statistically, this is a huge difference. It’s like comparing:

In other words, it’s a statistical thrashing.

The most disturbing outcome of the study was the fact that those who identified themselves as being in a leadership position identified leadership issues at the same pace as those not in leadership positions.  Based on that, it can be concluded that many leaders don’t understand their role in implementing analytics.  This aspect of leadership, while learnable, needs to happen quickly if organizations want to achieve the desired incomes from their forays into analytics.

The participants included people from all levels from a variety of healthcare organizations from locations across the country.  Each participant was asked to identify up to five challenges they faced in implementing healthcare analytics.  The challenges were then classified into 10 categories for further examination.

As previously mentioned, the analysis of the comments revealed that the top three categories were leadership (29%), data management (18%), and talent (14%). 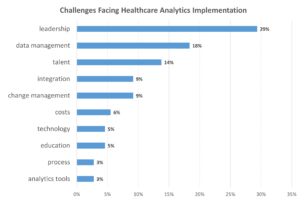 Even more surprising was the source of these comments.  As part of the study, the participants were asked to include their title on the survey they completed.  The titles were summarized into general categories which indicated the responses included all levels of the healthcare organization, from C-Level to the Analyst.

The titles were matched back to the individual challenges to determine if there was any disparity between responses based on organization level.  The levels were then summarized by span of control.  Those with a wide span of control included positions director level and above.  All of the others were included in the narrow span of control group.  The prevailing thought would be that the participants in the lower levels or narrower span of control, would point to the leaders more often than other leaders.  In actuality, of the total challenges categorized under leadership, the wide span participants pointed to leadership issues (27%) almost as much as the narrow span participants (31%).  In fact, several of their comments were the ones pointed most directly at leadership such as, “no champion”, “unclear direction,” and “executive leadership doesn’t have clear understanding of needs”. 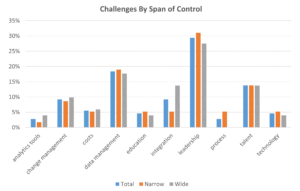 The lack of difference between the job types identifying leadership as a major challenge could also point to those in leadership positions not fully recognizing some of the areas they impact.  The only challenges where the disparities were significant were in integration and processes.  This is likely because of perspective.  The wide span executives are anxious to see results of their investments through data integration versus the narrow span personnel desire for more and better processes to make their jobs easier.

Finally, the participants were asked to develop solutions for their greatest challenges as a group.  Although leadership at 54% was the top solution by a wide margin, the order of the other solution categories changed substantially with talent at 22% moving to the second spot and process at 10% moving to the third spot.  Data came in fourth at 9%.

Although the results weren’t surprising, the strength of the argument for better executive leadership skills in healthcare was.  Many outside of physical healthcare organizations can see the problem and when you talk to people inside the organizations, they wholeheartedly agree.  It’s like the 800-pound gorilla that no one really wants to talk about, but as soon as it’s mentioned everyone starts nodding in agreement.

This is by no way meant to disparage current healthcare leaders.  They have been dealt a tough hand.  No other industry has been asked to make such dramatic changes in such a short period of time.  It’s like asking a major electronics retailer to also become a fine French restaurant within 12 months.  In less than a decade they have had to convert to electronic records; change their revenue model (requiring new analytical functions in the process); prepare for a new coding scheme; and lead a constituency that can be resistant to change.  Most healthcare executives were not trained to handle such broad business issues.  The good news is that leadership can be learned. It won’t happen overnight, but it needs to start right now if success is the desired outcome.

The Importance of Leadership

In a typical company or industry transformation the journey must progress along three continuums, namely: data/technology, organizational/people and process/workflows.  There is a very important part that must also be addressed – leadership.  Leadership is not a continuum but it must be present in each stage of each continuum and it must be consistent throughout the transformation.  It is the most important critical success factor in any change management situation.  It is often known as Executive Sponsorship in Lean Six Sigma or Project Management training.  It is the foundation of any successful transformation.

Executive leadership involves using a good solution selection process for software, technology vendors and personnel.  It is critical to make sure the needed resources are available to complete the project, including financial and personnel resources.  It involves having a vision for where the organization and the team is going.  Building credibility with the team members will be essential to raising them to the potential.  A credible leader will be able to get his/her followers to go over and above the basic requirements of the job.  It’s the secret top executives know about successful healthcare analytics implementations.